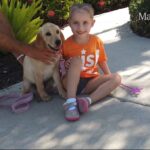 SARASOTA, Fla. – A Sarasota girl finally got her wish granted Sunday after waiting for nearly a year.

All the while, however, Melberth never gave up hope for better times, especially ones that would include a yellow Labrador Retriever puppy.