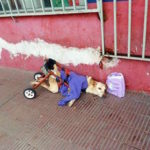 The dog called Lunita was tied up outside a local grooming shop in Argentina with a broken wheelchair and a bag of diapers. Fortunately, she was found and sent to a shelter. Later on, she was adopted by an American family. The video shows the condition Lunita was found in, and how she continued to progress. 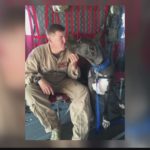 A big dog with an even bigger heart comforts Missouri soldiers