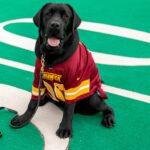 Washington, D.C. – Mando, the black English Labrador retriever puppy the Commanders adopted as their team dog in the summer, was an instant fan favorite when he was introduced in September.

Mando wears his No. 00 jersey while waddling through the stadium corridors amid gawking fans. Even to players, he’s somewhat of a celebrity.

The Commanders’ team dog is a pup in training with K9s For Warriors, which pairs military veterans with trained service dogs.