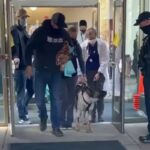 LACEY, Wash. — Thurston County Sheriff’s police dog Arlo has returned home after surviving being shot during a police chase and then multiple surgeries by veterinarians in Oregon.

The chase happened Wednesday night as deputies pursued an armed driver along I-5 south into Grand Mound. In the moments after the chase ended, gunfire erupted leaving both the suspect and Arlo wounded. 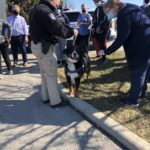