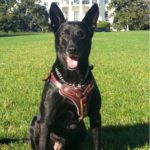 “Hurricane,” a former U.S. Secret Service dog, will be awarded the Order of Merit from PDSA, a British veterinary charity that equates the honor with the “OBE,” or “Order of the British Empire,” during a special ceremony in London in October. He will be the first-ever foreign animal to receive the award.